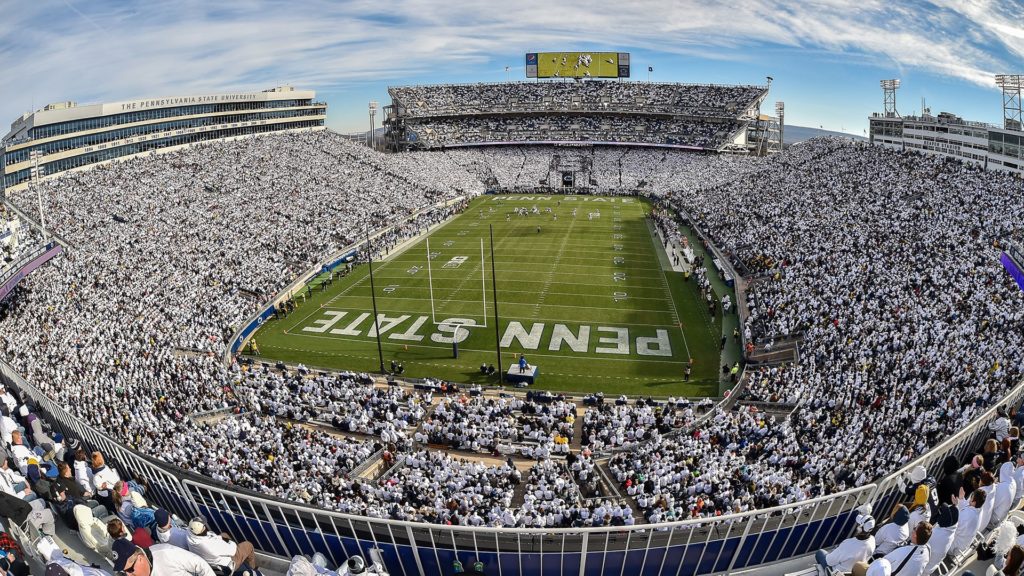 Home to the Penn State Nittany Lions of the Big Ten Conference since 1960, the Beaver Stadium is located in the Pennsylvania State University. This outdoor college football stadium was built in 1909 and is one of the premier football stadiums in the country. The stadium is also the first to have its interior included in Google Street View.

Beaver Stadium, just like all its predecessors, is named after James A. Beaver. In Beaver’s early years, he worked as a lawyer in nearby Bellefonte. However, at the outbreak of the Civil War, he enlisted in the Union Army as a second lieutenant and rose to the rank of brigadier general prior to his discharge in 1864. Later on, he served as a superior court judge, the governor of Pennsylvania (1887-1991) and president of the university’s board of trustees. He passed away in 1941 and is well-remembered as one of the most influential leaders in the development of the University.

The official seating capacity of the Beaver stadium is 106,572, making it the second-largest stadium in the Western Hemisphere and the third-largest in the world. Beaver Stadium was moved from its former site, the northeast side of Rec Hall on the west side of the campus to the east side of the campus. Since the 1960 move, the stadium has doubled in terms of capacity size.

In 1991, an addition of 10,033 seats on the upper deck in the north end zone and portable seats on the north end zone concourse increased the stadium’s capacity to 93,967. Another expansion and renovation prior to the 2001 season added more than 12,000 seats. This addition increased the stadium’s capacity to 106,572, which helped in the easing of the waiting list for season ticket requests from Penn State fans. The renovation and expansion also added restrooms and concession facilities, new scoreboards with instant-replay capability, and improved handicap access and pedestrian circulation patterns. The most noticeable changes are the 60 enclosed skyboxes in a three-level structure above the East stands.

The stadium is widely known as one of the toughest venues for opposing teams in collegiate athletics. It was also recognized as having the best student section in the nation in 2008 and 2009. Additionally, it was voted the number one football stadium in college football based on USA Today poll, where it garnered more than 41% of the vote in 2016.

There are some things for fans to look out for at a Beaver’s home game. Check this out if you are new to the Beaver’s game:

Usually, the Nittany Lion can be found going around the field throughout the game. Despite being just a mascot, the lion will often “fight” with other mascots if they enter the area around the student section. The Nittany Lion will also usually do some sort of performance around the end of the third quarter. At times throughout the game, the student section will cheer “We want the lion” and the lion will select the loudest section and be crowd-surfed up the stands. Is this not crazy enough for you?

The drum major does two front flips at the beginning of the band’s pregame performance as the entire crowd cheers him on. The band is consistently ranked as one of the best in all of college football, winning the 2005 Sudler Trophy, which is awarded to the best band each year.

For further information on the Beaver Stadium in University Park, visit the pages listed below.

Ticket Policies:
For information on ticket guarantee and on our preferred ticket marketplace please view the Beaver Stadium tickets page.